When it first opened in November 2012, S.E.A. Aquarium at Resorts World Sentosa was the world’s largest aquarium, until Chimelong Ocean Kingdom unveiled two years later. Today, the aquarium continues to be in list of the world’s largest and most impressive aquariums, and is now home to more than 100,000 marine animals representing 1,000 species - all housed in beautifully aquascaped exhibits that replicate the animals’ natural environments.

We know many Singapore residents are making plans to #supportlocal attractions, or thinking of ways to utilise the SingapoRediscovers Vouchers (SRV) vouchers. A trip to the aquarium is probably on your mind, because, why not?

S.E.A. Aquarium has continually refreshed its animal collection, and recently revamped its educational content along with new immersive audio-visual experiences. We share some insider tips - from aquarists and guides - on what you should look out for when exploring the aquarium.

Start with a bang, they say. It’s the first exhibit and one of the most impressive with more than four million litres of water. The exhibit simulates how some shipwrecks evolve into thriving marine habitats with sponges and corals colonising the wrecks. The Shipwreck Habitat can be viewed via two galleries – a flat viewing panel, and an immersive walkthrough tunnel.


Prepare to be plunged into a sublime underwater environment, complete with specially designed light effects and fascinating soundscapes at the refreshed Shipwreck Habitat.

S.E.A. Aquarium is a place where you can get up close to some of the amazing marine life found near/within Singapore’s waters. Check them out after you’ve passed through the Shipwreck Habitat.

Look out for: the fluted giant clam and decorator crabs. Don’t forget the brown banded bamboo sharks on the floor tank!

Despite its name, the Coral Garden houses (drumroll . . .) ZERO live corals. This cylindrical habitat, measuring 8m in height and 6m in diameter, portrays a colourful reef world with more than 5,000 fishes from over 100 species. As real as they look, all the corals are artificial for a good reason – the reef-eating fishes would’ve destroyed them if they were to co-exist. Are there real, live corals in S.E.A. Aquarium then? Read on to find out.

The Coral Garden gets an extra festive look with special lighting this holiday season. This exhibit can be seen at two levels.

The Coral Garden can be seen at two levels.


Look out for: The Napolean wrasse - a key species in coral reef ecosystems as they feed on the crown-of-thorns sea stars, which can damage coral reefs if their numbers are not kept in check.

The sea jellies gallery is one of the most visually stunning areas in the aquarium, perfect for shutterbugs. That’s because the exhibits are enhanced with special lightings to showcase the fluid dynamics of these prehistoric creatures. Contrary to popular belief, the sea jellies in the aquarium can neither change their colours nor glow underwater (though some species do produce light)! These intriguing, gelatinous-like animals have no bones, brains, teeth, blood or fins — and they are made up of more than 95 percent water. Six species have been successfully bred at the aquarium, including the moon sea jelly and white spotted sea jelly. 
Look out for: the moon sea jelly, named after its pale bell that resembles a full moon.

This habitat needs little introduction: it’s THE centerpiece of the aquarium. The one that fills your social feeds. This habitat contains more than 18 million litres of water (equivalent to 7 Olympic-sized pools) and is home to 120 species of animals. 
Fun fact: The Open Ocean Habitat is actually certified as a full open water dive site because of its total size, volume, and water movement. So, if you have a busy schedule and can’t find time to travel for open water dives overseas, you can get certified right here in Singapore, at S.E.A. Aquarium! Plus, guaranteed sightings of manta rays! (Note: Dive lessons have been suspended temporarily).

Check out this video of our manta rays:

6) One of the world’s largest collections of live corals

Did you know that corals are not plants, but in fact animals? They are in fact close relatives of sea anemones and sea jellies! S.E.A. Aquarium has one of the largest live coral displays in the world? We have over 100 species of hard coral and at least 20 species of soft corals that can be found across 13 habitats.

Most of the live corals are housed at the revamped “Underwater City” zone. There, you can even compare the artificial corals in Coral Garden against the vibrant colours of the live coral exhibits like the picture above. Look out for: The expanded zone near the exit of S.E.A. Aquarium which showcases coral fragments for the first time in the aquarium. It offers a sneak peek into how our aquarists carry out coral propagation.

Find out more about our coral propagation efforts.

Towards the end of the aquarium, you’ll come face to face with the apex predators of the sea. This exhibit is home to more than 70 sharks from 12 species. Just like the Shipwreck Habitat, you can view these creatures from the underwater tunnel or the flat viewing panel. Sharks are widely misunderstood creatures, and this is where you can learn more about their importance in keeping the ocean ecosystem balanced. 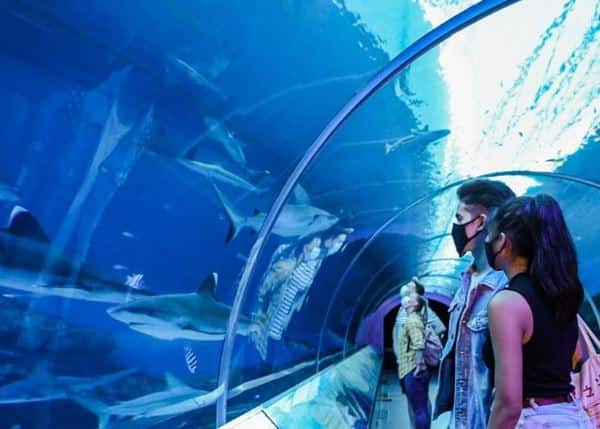 Look out for: the sand tiger shark with protruding teeth, and the endangered scalloped hammerhead shark which has an almost 360-degree vision.

Yes, S.E.A. Aquarium is teeming with saltwater species but it is also home to freshwater species. Most freshwater fish are usually not as visually stunning as their saltwater counterparts – they tend to be more patterned with 'subtle' colouration. However, they still possess remarkable characteristics that enable them to survive in their environments.

Look out for: Animals such as the paddlefish and alligator gars which are also referred to as living fossils as these species have remain relatively unchanged since they first appeared as far back as a few hundred million years ago. Also, look out for the colourful poison arrow frogs! The new Rainforest Habitat is part of the latest enhanced zone at S.E.A. Aquarium

At the Discovery Pool, come up close to animals such as the epaulette shark as well as the knobbly sea star, a native sea star recognised by the chocolate chip-like knobs on top of its body. The area is equipped with wash basins for you to sanitise your hands before and after the experience. As with most animal-themed experiences, the best time to see these animals is at their most active - feeding time! While scheduled feeding sessions by our aquarists have been suspended temporarily (in view of safe management measures), you may chance upon our aquarists feeding our marine residents from time to time.

So if you’re planning your visit, do head in early (and opt for admission before 11am on weekends) and you may get the chance to see all the action!